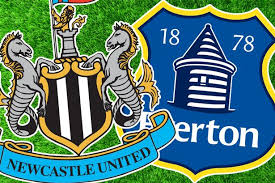 Papiss Cisse's fifth goal in six games launched a Newcastle fightback as they ended a four-match losing streak with a 3-2 victory over Everton.

The Senegal international cancelled out Arouna Kone's fifth-minute opener - his first for Everton on his first Barclays Premier League start for the club he joined during the summer of 2013 - with a close-range finish 11 minutes before the break .

However, Toffees boss Roberto Martinez may feel the African Cup of Nations-bound frontman was lucky to still be on the pitch after appearing to catch full-back Seamus Coleman with a flailing arm four minutes earlier, and there may yet be repercussions with referee Craig Pawson having taken no action at the time.

But if it was Cisse who started the ball rolling, it was Ayoze Perez and Jack Colback who completed the job with the Spaniard's fifth goal for the club giving them a 51st-minute lead which was cemented by Colback's first in a black and white shirt 16 minutes later, although substitute Kevin Mirallas' late strike made for a tense conclusion.

Newcastle ran out in front of a crowd of 52,313 having lost their last four games in all competitions, three of them in the Barclays Premier League, a run which included a 1-0 derby defeat by Sunderland in their last home fixture.

With some bookmakers having stopped taking bets on Alan Pardew being appointed the next Crystal Palace manager, there was an air of uncertainty around St James' Park before kick-off, although the 53-year-old and his players were concentrating simply on the 90 minutes ahead.

They were boosted by the Everton team-sheet, which showed seven changes, many of them enforced by injury and suspension, to the side which lost 1-0 at home to Stoke on Boxing Day, although it was the visitors who started much the brighter.

They got their reward with just five minutes gone when Aiden McGeady slid the ball into the space where full-back Paul Dummett should have been for Seamus Coleman to leave Yoan Gouffran in his wake and cross for Kone to convert from close range with central defenders Fabricio Coloccini and Mike Williamson looking on in horror.

The Magpies were simply not at the races as Gareth Barry was allowed to orchestrate from the middle of the park, and when they finally managed to string two passes together, Moussa Sissoko's touch deserted him in spectacular style as he ran on to Cisse's 12th-minute flick.

However, they gradually worked their way into the game, although without being able to find the required quality in the final third with keeper Joel Robles untroubled.

Coleman was left on his backside and claiming bitterly to the referee after clashing with Cisse as the pair awaited the delivery of a set-piece, and replays suggested the defender might have had a point about the striker's swinging arm.

He was even more aggrieved four minutes later when the striker fired the home side level, reacting first when Williamson turned Cheick Tiote's cross back across goal to beat Robles.

Martinez replaced James McCarthy with Ross Barkley before the restart, and it took the newcomer just three minutes to embark upon a trademark run upfield, although his pass to Kone was poor.

But it was Robles' goal which came under threat two minutes later with the keeper turning the ball aside after it ricocheted off Gouffran's shins, although his relief was only momentary as Tiote picked out Perez on the left and he cut inside Distin before thumping a shot through Coleman's legs and into the bottom corner.

The home side were growing in confidence, but they could not afford to relax and they were grateful to see Samuel Eto'o sky a 64th-minute effort high over after Leighton Baines had out-fought Tiote on the sideline.

But the visitors fell further behind three minutes later when Barkley failed to cut out Daryl Janmaat's cross and Colback stabbed the ball past Robles to make it 3-1.

Mirallas reduced the deficit with six minutes remaining when he got behind a static Newcastle defence to stab Baines' long ball past the advancing Jak Alnwick, but that was as good as it got for the Merseysiders as they slipped to a third successive defeat.