Time To Give Bruce Praise?

The race to be the FIFTH Premier League manager to lose - or leave - their job this season might be as quick as the previous two, with the exits of Unai Emery and Quique Sanchez Flores following hot on the heels of former Spurs boss Mauricio Pochettino a fortnight ago.

It's interesting to note that Steve Bruce, a hot tip with the bookies in August, is nowhere to be seen.

Asking the question ... is it time for Newcastle fans to give him some praise? 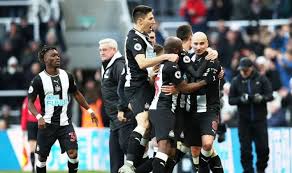 Macro Silva looked all set to take bronze medal in the sack race when a miserable season so far was compounded by humiliating 2-0 home defeat to Norwich - but he clung onto his job long enough for TWO more managers in Emery and Flores to cross the line before him.

Another defeat, this time away at Leicester, means the Toffees languish just one place and two points above the relegation zone ahead of a daunting trip to runaway leaders and arch rivals Liverpool on Wednesday night.

The board have announced Silva will take charge of that game but the fixtures won't get much easier as they face Chelsea, Manchester United, Arsenal, Manchester City Leicester again in their next eight games.

The Toffees sacked their previous manager Sam Allardyce for mid-table nothingness so they shouldn't accept the same under a man who spent a lot of money in the summer to challenge for the top six at the very least.

It's not as if his brand of football is bringing entertainment to Goodison Park either, having only managed eight goals there in an overall tally of just 14, and fans are losing patience quickly, if they haven't already.

Ole Gunnar Solskjaer said he felt no extra pressure now that Mauricio Pochettino is on the market, but he must be a little bit worried now after back-to-back draws to newly-promoted Sheffield United and Aston Villa since then.

It's been a spluttering first quarter of the season with Ole at the wheel, and both of their most recent Premier League games summed up his reign so far with the huge disparity between the highs and lows his young side can produce.

Solskjaer knows the Manchester United hierarchy are long-term admirers of Pochettino, and may well be concerned of other big clubs pinching him first if they don't act soon - if indeed they are pondering the thought.

Alarm bells will have been raised with United's abject display against Sheffield United when trailing 2-0, and although they turned it around to almost win, a home point against Aston Villa is simply not good enough.

The derby looks this weekend after a home clash with Pochettino's former club, while a must-win clash with Everton is next after that.

Will they trust him with the January transfer window?

A collapse in form in recent weeks saw Manuel Pellegrini cut to 9/2 but it looks like Saturday's incredible victory at Chelsea has bought him more time.

Before then, the Hammers had picked up just two points from their last 21 available and have lost three of their last four home games - two of which London derbies to Crystal Palace and Spurs, with their point coming against promoted Sheffield United.

Pellegrini is far from out of the woods just yet with tough matches against Wolves and Arsenal this week and if they don't get much from either, then a defeat at Southampton could spell the end.

Ralph Hasenhuttl soared to the head of the sack race market after Southampton's record-equalling 9-0 home defeat to Leicester but is still hanging on in there.

Saints picked up just one point from the next three but finally grabbed a priceless victory over Watford, who then sacked their manager, on Saturday night with a little help from a VAR clanger.

With winnable games coming up against Norwich and Newcastle, he has a great chance to restore faith that he can turn this season around.