The Word Clattenburg Used To Mikel! 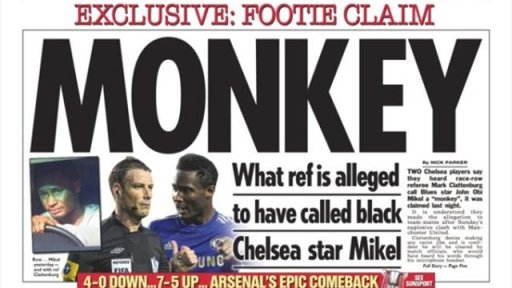 While it has been widely reported over the last few days that referee was alleged to have called Juan Mata 'a Spanish t***, the media did not reveal what was apparently said to John Obi Mikel other than that it was a 'racist slur'.

Well the whole allegation is out in the open now with The Sun's front page having a one-word headline screaming from its front page: 'Monkey', with the sub headline: 'What ref is alleged to have called black Chelsea star Mikel'.

Other newspapers corroborate the claim that 'monkey' was the alleged word used, although in less dramatic fashion.

"It is understood the pair made the claim to team-mates in the dressing room after Sunday’s explosive clash with Manchester United.

"Clattenburg vehemently denies making any racist jibe and is confident he will be cleared by match officials, who heard his every word through a microphone headset."

A source also told the paper: "He said nothing of the sort - and he will fight this all the way.

"There’s always a lot of noise on the pitch and the players could easily have misheard."

The Daily Mail meanwhile, claims that Chelsea's case is already in jeopardy.

The club have brought in external lawyers to look at the issue as they hold their own independent inquiry to see if their case has any chance of success.

The paper states: "Chelsea will proceed with the case against the referee only if they are satisfied the claims made by the players after the game will stand up to the FA’s burden of proof.

"It means they will need to satisfy an FA commission 'on the balance of probability', but they also have to negotiate the complexities of the Metropolitan Police’s investigation into the affair."

However, even then that might not be the end of the matter as if Chelsea do indeed drop their case, then the spotlight will fall on them.

According to the Daily Express, leading referees want the FA to take action against Chelsea if their racism case collapses.

"Feeling is so strong that certain leading officials want the FA to take action against Chelsea and charge them if Clattenburg is found innocent by the game’s governing body – and in a court of law if the case was ever to get that far," reports the paper.

The Daily Express also though claims that it was 'at least three players' that heard Clattenburg use the word monkey.