Terry McDermott: “Liverpool TV goes all round the world so we’re talking to an awful lot of people.

“They have been breathtaking and the atmosphere inside and outside of the ground on match days is spine-tingling.

"I know that on Sunday the travelling Geordies will only help to raise the sound levels another notch regardless of how unhappy they are with their own side.

“When Newcastle finished runners-up to Manchester United in 1996 we were unquestionably the best team in the country and I believe Liverpool are the tops this season but they might well finish just short as we did.

"I hope not but it can easily happen. I hadn’t been back to Anfield for eight years until I went to the Man City game and I found it a wonderful experience. Not only the great drama but seeing a lot of old faces so I was looking forward to returning for Chelsea.

“I walked into the ground with David Johnson and Jimmy Case and chatted with the likes of Ian Rush, John Aldridge, and Alan Hansen but the greatest bit of all was meeting up with Kevin Keegan again.

“Someone told me KK was going to the game so I rang him and asked where he was. ‘I’ve just left Cheshire, I’m on my way,’ he replied.

“I hadn’t seen Kev for a little while and it was so like old times. He came into the hospitality lounge where I was talking to the punters and he was received like the hero he was in his playing days.

"I then went along the corridor to watch the match in a private box where he was the guest of some guys from Saudi Arabia.

“He was brilliant, a different class. Full of fun. It’s criminal that he is not in football nowadays. All the great memories at Newcastle came flooding back.

“I rate Gerrard alongside Kenny Dalglish and Kevin Keegan and there is no higher praise than that.

“I’m praying that his slip when he lost his footing and allowed Demba Ba to run on and score for Chelsea doesn’t cost him his medal because that would be tragic. Steven has been the best player at Liverpool for the last 15 years.

“If there is one slight criticism of Liverpool it’s that when they get down the flanks and the ball is crossed there is no one to get in a telling header.

“That’s not the forte of Suarez or any of the attackers.

“Liverpool are all right on corners or free kicks because they can get big players up from the back but they lack aerial domination in open play. That’s why Kenny Dalglish signed Andy Carroll of course. Carroll gave them another option. 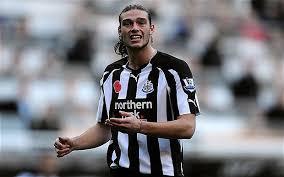 “We had Andy in Newcastle’s reserve side when I used to travel to their matches with Lee Clark. He was unplayable at times and I believe he should be in the England World Cup squad when it is announced next week. Andy would be a real threat off the bench. He would be going for certain but for a bad injury earlier in the season.

“I used to take Carroll for shooting practice in training. He would miss one shot completely and then rifle the second into the top corner of the net. Of course he’s improved since then!”

“Oh, I’ve been devastated by what has been happening recently.

"The results have been awful after such a bright start to the season.

“I don’t know who is responsible for not replacing Yohan Cabaye but that was a terrible mistake. It’s not as though they didn’t know he was going. They apparently agreed it with him five months earlier so they had plenty time to find another midfield creator.

“Everything has gone pear shaped. It looks as though there is a lot of unrest.

“Perhaps Newcastle ought to have turned to their kids and given them a chance because the crowd would get behind them. Adam Armstrong looks a more than decent striker and Paul Dummett may represent Wales but he’s a Geordie through and through with a heart the size of a dustbin lid. They need more like him.

“Newcastle and Liverpool are my clubs.

“I played my best football at Liverpool and won all my medals there but I was probably happiest at Newcastle.”