​Newcastle manager Steve Bruce has admitted he may need to investigate the source of Newcastle's injury crisis, as three more players were consigned to the treatment room following the Magpies' draw with Wolves.

Paul Dummett was forced off at Molineux after just 12 minutes with a hamstring injury, after a groin strain had kept the left-back out for much of the Christmas period.

Dwight Gayle also hobbled off with a hamstring injury just 16 minutes later, before Joelinton suffered a groin strain but played through the pain barrier as Newcastle recorded a credible draw.

SB on injuries: "I haven't known anything like it. I thought it was going to be a repeat of Leicester where we lost four players in 12 minutes. Joelinton should have come off. He played at half pace in the second-half but had courage to carry on. We're down to the bare bones." pic.twitter.com/dXAQKKskZ1

The Magpies finished their New Year's Day clash with Leicester with 10 men, after “Whether it’s bad luck or we have to go a little deeper to look at it we need to find out.”

Bruce had blamed the intense Christmas fixture schedule for the sheer volume of injuries picked up against Leicester.

There is no let up for his side this month though, as the games continue to come thick and fast with three matches in the space of eight days over the course of the next two weeks. 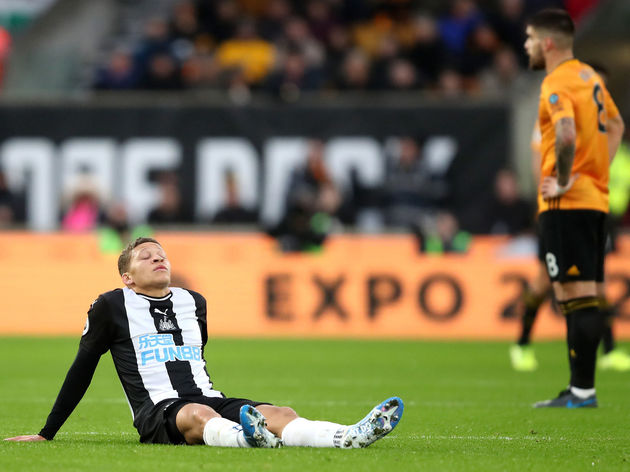 Newcastle's draw with Rochdale in the FA Cup third round means the Magpies face their reply with the League One side on Tuesday night, followed by the visit of Chelsea in the Premier League and then a midweek trip to Goodison Park.

Despite the hectic week of fixtures, when asked if he would blood some youngsters in the FA Cup in light of the fresh injury crisis, Bruce appeared reluctant to do so.

“We already have two kids in the team in the Longstaffs as far as I’m concerned," Bruce added.