Sitting Safe Or Should We Be Closer To The Top?

We currently stand 9th in the table, 11 points off Man City who hold top spot ... and eight points away from Crystal Palace at the bottom.

So what else happened at the weekend apart from our 2-2 draw at Southampton? 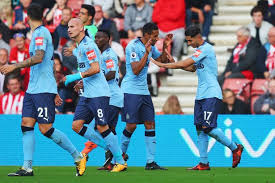 Leicester were unable to end their home hoodoo against West Brom as Monday night's Premier League game ended 1-1 at the King Power Stadium.

West Brom are now unbeaten in eight visits to Leicester, winning five, and it always looked like a record they would extend after Nacer Chadli gave them the lead with a superb 30-yard free-kick.

Riyad Mahrez equalised with 10 minutes remaining but Leicester were unable to go on and get that elusive victory, meaning the last time they won at home against West Brom was January 1994 - Iwan Roberts scoring twice in a 3-2 success at Filbert Street.

Everton needed a late Wayne Rooney penalty to snatch a 1-1 draw at Brighton.

The struggling Toffees were staring at another defeat when Anthony Knockaert put Brighton ahead eight minutes from time.

But Seagulls captain Bruno was penalised for fouling Dominic Calvert-Lewin with two minutes remaining and Rooney tucked home the equaliser.

However, the goal is unlikely to lift the pressure on Everton manager Ronald Koeman, whose out-of-sorts side are still without an away win since January.

Manchester City moved two points clear at the top of the Premier League with another thumping victory but Crystal Palace claimed the win of the day by upsetting Chelsea.

Palace had managed neither a point nor a goal in their opening seven matches but the return of Wilfried Zaha from injury inspired them to a 2-1 victory over the reigning champions.

Their first goal in the 11th minute was credited to a Chelsea player - Cesar Azpilicueta the unfortunate man - but Zaha struck the winner just before half-time after Tiemoue Bakayoko had equalised with his first Premier League goal.

City took their goalscoring exploits a step further, defeating Stoke 7-2 at the Etihad Stadium, and are now as short as 2/5 for the title.

City were 3-0 up in 27 minutes through goals from Gabriel Jesus, Raheem Sterling and David Silva.

Stoke gave themselves hope when Mame Biram Diouf netted in the 44th minute and the Etihad suddenly grew anxious when a Kyle Walker own goal closed the gap further two minutes after half-time.

But any worries were swiftly banished by three more City goals in seven minutes, with Jesus' second followed by strikes from Fernandinho and Leroy Sane. Bernando Silva finished off the scoring 11 minutes from time.

City's victory coupled with Manchester United's goalless draw against Liverpool at Anfield means Pep Guardiola's side have pulled clear of their derby rivals, who are out to 7/2.

Tottenham sit third and are 14/1 third-favourites, sitting three points behind United, after Christian Eriksen scored the only goal of a 1-0 victory over Bournemouth - their first Premier League victory at Wembley.

Tom Cleverley scored an injury-time winner to earn Watford a 2-1 victory over Arsenal at Vicarage Road and lift the Hornets to the lofty heights of fourth in the table.

The Gunners appeared in control after Per Mertesacker marked his first league start in 18 months with the opening goal in the 39th minute.

Mesut Ozil missed a great chance to make it two and the hosts capitalised fully, with the introduction of substitute Troy Deeney the catalyst.

Deeney levelled in the 71st minute from the penalty spot after Hector Bellerin was controversially deemed to have felled Richarlison by referee Neil Swarbrick.

Etienne Capoue then hit the woodwork before Cleverley smashed the ball into the roof of the net two minutes into added on time.

Watford are 100/1 to be inside the top four come the season's end, a market in which Arsenal are on the drift at 15/8.

Michail Antonio's route one goal in the 19th minute came eight minutes before Andy Carroll was sent off after picking up two yellow cards in less than two minutes.

Abraham capitalised on a mistake from Terriers keeper Jonas Lossl in the 42nd minute and then touched Jordan Ayew's shot over the line three minutes after the break.

The Terriers are now the shortest-price team in a competitive relegation market at 10/11. Palace are out to 11/10 but half the division's 20 teams are single-figure prices at present.