Italy and Nigeria shared the honours in a lively friendly at Craven Cottage on Monday night. 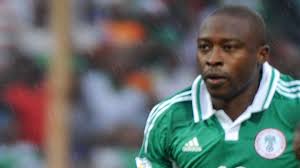 However, Sunderland forward Emanuele Giaccherini equalised for Italy in the 47th minute as the clash finished 2-2.

Both teams had their share of chances to win the game but were denied by great goalkeeping.

Substitute Alessandro Diamanti came closest to snatching a decider for Italy but saw his free-kick hit the crossbar five minutes from time.

Italy coach Cesare Prandelli had demanded a strong performance from his players in what was his 50th game in charge of the Azzurri.

Despite the result - Italy's fourth consecutive draw - his players delivered in front of a crowd of 15,000.

Nigeria went into the contest fresh from qualifying for their fifth World Cup finals and proved worthy opponents.

Only four players that started in Saturday's World Cup play-off victory over Ethiopia were included in Stephen Keshi's starting line-up.

The African champions had the first chance of the game in the third minute when Victor Moses' 30-yard free-kick went wide, but it was Italy who took the lead through Rossi's 11th-mintue strike.

Nigeria almost equalised in the 13th minute when Sirigu was forced at full stretch to turn away Ogenyi Onazi's bullet strike from outside the area.

Italy should have doubled their lead midway through the first half but Riccardo Montolivo fired wide from a good position.

Balotelli then missed a golden chance before the half-hour mark when he failed to beat Ejide on a one-on-one.

It proved costly as Nigeria equalised in the 35th minute when Dike headed Ameobi's cross past a helpless Sirigu.

The African side went in front five minutes later.

A fast break from Nigeria surprised Italy's defence and saw Ameobi get on the end of Francis Benjamin's cross from the left and strike the ball past Sirigu to silence the Italian supporters.

Before half-time, Balotelli played a one-two with Rossi and his right-footed strike was kept out by Ejide.

Italy drew level early in the second half when Antonio Candreva spotted an unmarked Giaccherini in the left side of the box and his left-footed shot beat Ejide.

Before the hour mark, Ejide made a vital save to deny substitute Andrea Pirlo's curled free-kick before the Nigeria goalkeeper was forced out of the action soon after through injury, with Vincent Enyeama taking his place.

Sirigu was then forced to palm over the bar a goal-bound strike from substitute John Ogu as Nigeria sought to go back in front.

With 12 minutes remaining, Christian Maggio's dangerous cross towards the far post found an unmarked Balotelli, but the forward struck the ball poorly in what proved to be a frustrating evening for the former Manchester City man.

Diamanti then almost snatched the winner but Nigeria, who like Italy went through World Cup qualifying unbeaten, held on for the draw.