Martin Keown was blown away by Newcastle United midfielder Jonjo Shelvey for his performance in the win over Arsenal at the weekend. 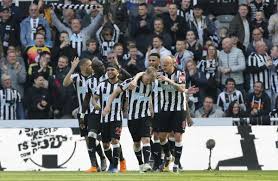 The deep-lying playmaker inspired his side to a 2-1 victory at St James’ Park, which has surely secured the club’s Premier League status for another season.

Rafael Benitez’s team passed the 40-point barrier in the league with their fourth consecutive victory and are the in-form team in the division right now.

The Magpies fought from a goal down to beat Arsenal, with Ayoze Perez and Matt Ritchie both on the scoresheet.

However, BBC pundit and ex-Arsenal defender Keown decided to single out central midfielder Shelvey for his contribution.

The 26-year-old delivered an eye-catching display with his wide range of passing and industrious work in the centre of the park.

He is now being tipped by many to make a late run into the England squad ahead of this summer’s World Cup.

“I think he’s a special talent, he may have been a hot head in the past,” Keown said on BBC One programme Match of the Day 2.

“This fella is like a golfer who can pick out the right club he needs when he needs it. If this was [Kevin] De Bruyne we would be off our seats.

“He’s got everything in the bag and creates danger with his passing. It’s taken a long time but he’s got all the necessary tools. He wants to make things happen for his team.”

Shelvey has been an influential figure in Newcastle’s revival in the second half of the season and is proving why he was previously on the books at Liverpool.

Manager Benitez is certainly starting to get the best out of the midfielder and there is no doubting his technical ability. The controversial side to his game appears to have been eliminated and he is now doing his talking on the pitch.

Shelvey definitely would bring something new to the England squad in the summer and they need a technician to help dominate possession. The Newcastle talisman is proving he can fill that role and he must surely be eyeing a strong finish to the season.