The bookies are only looking at Cardiff or Brighton for that third relegation spot. 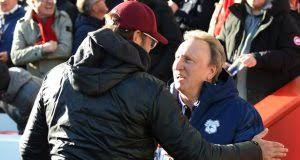 Rafa's boys are safe, despite Cardiff's win on Tuesday night.

The 18th-placed Bluebirds arrived at the Amex Stadium five points adrift of their opponents, but their 2-0 brought them within two points with both sides facing a tough run-in.

Brighton have a game in hand, but with three top six sides to face they'll have their work cut out, especially since they've lost six on the bounce. Cardiff also have a tough run starting with Liverpool on Sunday.

Despite facing title-chasing Liverpool on Sunday and finishing the season at Manchester United, City manager Warnock retains hope of pulling off an unlikely great escape.

"There were so many pundits this morning said it would be our last game in the Premier League. We're alive and kicking," said Warnock.

"I was proud of the performance: it was disciplined, I think we could have created a few more (chances) but overall I was delighted with all the departments.

"I've never lost belief that we can win games. But whether we can get enough points is a different ball game. I think we were 100-1 in something today (to be relegated) - 100-1 on that was. There's a lot of water to go.

"At least now it makes Sunday's game more important. It's a great occasion Sunday, full house against one of the best teams in the world, and we aren't relegated yet."

Warnock admits he does not have a points target in mind to beat the drop.

"No, we don't. We might not get another point. I honestly don't know," he added. "But we're quite capable of picking points up off any of the teams we've got to play.

"You might think I'm in cuckoo land, but I think that we've got that ability on our day."