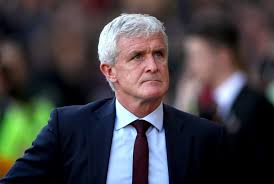 Last week's goalless draw with south coast neighbours Bournemouth was described as a "statement" performance by manager Hughes, as his side ended a dismal run of three straight league defeats.

Though that point drew a line under a difficult period, another stalemate at home to Newcastle extended Saints' winless run as well as their drought in front of goal - on an afternoon that could have allowed Hughes' side to create daylight between themselves and the relegation places.

It was a familiar case of missed opportunities for Southampton, who, like Newcastle, have only registered six league goals so far, as the hosts failed to find a breakthrough despite their 22 attempts.

Lemina was often Saints' biggest threat going forward and was unlucky to be denied by the post, while Ryan Bertrand and Cedric Soares offered excellent offensive support from the flanks.

Defender Jack Stephens' proved dangerous from set-pieces and saw a powerful header saved by the alert Dubravka just before the interval.

But the final few minutes, as Stephens' went agonisingly close to securing the points and Long failed to hit the target from close-range, summed up Southampton's predicament in front of goal so far this season.

At the back, Hughes' side were solid. But their proximity to the drop-zone after 10 games is a growing concern and, with champions Manchester City arriving at St Mary's next weekend, pressure on Hughes will likely continue to mount.

"It's disappointing once again in respect of not getting what we deserved, we had 22 shots and we weren't able to convert any of them," said Hughes.

"At the end of the day it's back-to-back clean sheets, but at the top end of the pitch we need to start scoring goals.

"Clearly we are creating chances, right at the death we had a good chance for Shane, there were balls bobbling around the box, but sometimes you need something to go in off someone's backside and the football gods aren't smiling on us at the moment."