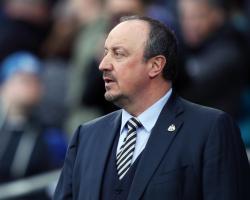 Benitez's side kept the title race alive as second-half goals from Christian Atsu and Isaac Hayden gave already-promoted Newcastle a comfortable 2-0 win at Cardiff on Friday.

But Brighton will be crowned champions if they beat Bristol City at home on Saturday evening.

"I don't think so," Benitez replied when asked if he would watch Brighton's televised game

"I can not do anything, so why do I have to be there suffering or not suffering?

"We still think we can win (the title), but we can do nothing

It is depending on them, we have to wait."

Newcastle's win was their 14th away league victory of the season - a club record.

"The players have been doing so well the whole season, especially away, that it was a pity not to break the record before," Benitez said.

"So to do this after promotion, and be closer to Brighton, I think is quite positive for everyone at Newcastle.

"We did our job and we are happy with that

The fans are delighted and can go back happy.

"I was pleased with the reaction of the players, especially after we gave them the day off after the promotion as it is more difficult to control what they can do

"But they were quite focused and you could see (in the) second half we played very good football."

Cardiff manager Neil Warnock was unhappy with the performance of referee Graham Scott and had a stinging rebuke for his boss Mike Riley, manager of the Professional Game Match Officials Limited.

Warnock felt Sean Morrison's first-half header, disallowed for a push on Ciaran Clark, should have stood, while he complained that Atsu's opener came from a "nothing free-kick"

"I thought we were a bit unlucky, I didn't see anything wrong with Morrison's header, it's a very soft foul," Warnock said.

"If you look at the free-kick he gave for their first goal, it's a nothing free-kick.

"We have to start educating players what to do when you get a referee like that.

"I thought Scotty had a bad game today, he was poor in general with his positioning and interpretation.

"(Aleksandar) Mitrovic came on and never looked at the ball once, he fouled Morrison three times and he (Scott) didn't see it

Why? Because he's not educated.

"There is no wonder, if Mike Riley's his tutor, no wonder."

He said: " He's been at the ground since half past four, so there's no wonder he's knackered

"H e shouldn't have been in until half six, and the game should have come first really

"It was something I wasn't aware of and it won't happen again."