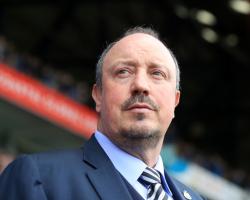 The 57-year-old Spaniard finally returned to Tyneside on Monday evening having three times had to abandon the journey from his home in the north-west as he continued his recovery from surgery.

He was back behind his desk on Tuesday as the players enjoyed a day off, and is due back on the training pitch on Wednesday to start the process of plotting a third successive top-flight victory.

Benitez was an armchair spectator on Sunday as the Magpies won 1-0 at Swansea days after he underwent a procedure to address an infection resulting from an earlier hernia operation.

He was in regular touch with coaches Paco de Miguel Moreno and Mikel Antia throughout and addressed the players as a group by telephone before kick-off.

He will now resume control and may have to speak to several members of his squad after a turbulent transfer window.

Striker Dwight Gayle was linked with a big-money move away from Tyneside after it emerged that the club would entertain offers, while midfielder Jack Colback has been training with the Academy players after finding himself surplus to requirements.

Gayle was used as a second-half substitute at the Liberty Stadium and, with Benitez having got only some of the men he wanted during the transfer window, he may yet have a significant role to play.