Put All The Blame On WALLY! 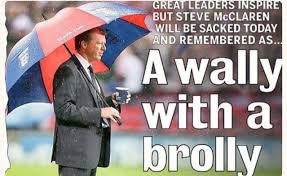 Early last month (11 April), Steve Claridge had this to say about what Steve McClaren had managed to do at Newcastle this season:

“Said the other day that (2008/09 Newcastle United) squad was the best to ever be relegated.

“Mike Ashley gave  the money to sign players and there is only one man responsible…Steve McClaren.

“It is an incredible under achievement.

“How he managed to get this side into the bottom three…?