Pickford Is Sick Of It!

Ex-Mackem goalkeeper Jordan Pickford has taken a swipe at player-turned-pundit Gary Neville and a host of other critics who he feels "hate" him. 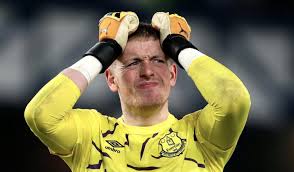 Newcastle United fans certainly do, make no mistake about that, but others seem to feel the same way.

The England number one's mistake, letting Christian Benteke's equaliser slip under him, in the 3-1 win over Crystal Palace put the focus back on his individual form after a mixed last 18 months.

Neville criticised him back in September for laughing when 3-1 down to Manchester City, while plenty have been quick to scrutinise Pickford over other perceived failings.

Even some Everton fans have been so frustrated by his lack of consistency they have called for him to be dropped.

Pickford knows he is there to be shot at but believes his position as first-choice for England makes him a particular target.

"I think the press and everybody; the punters - look at Gary Neville - they just want to come for England players," he said.

"Everyone gets stick. Some get a lot more praise than others. That's part of being an England player.

"It is what it is. Look at Joe Hart when he was number one. He got pelters every week.

"You just keep it away from your head as the only person who can sort things out is yourself as an individual, on the pitch and in training.

"It's looking after things on the pitch for Everton that is my main aim. That gets you picked for England.

"It's funny because everyone raves about you when you are with England but then you get back to your club and everyone wants to slate you.

Last season Pickford made four errors which led to goals. He has two in the current campaign.