The Newcastle manager was dragged into the fight between the local press and Mike Ashey when the club owner banned the media from Pardew's interviews.

When it first happened, Pardew seemed happy to answer questions from the Chronicle ... but the club's media lady stepped in to stop the talks.

It was an embarrassing moment for the manager, and he seemed surprised at the outcome, but later he echoed Ashley's view and said the man was right to pick and choose who reported the news.

Alan Pardew: "I keep criticising the press locally here in that when we win, we are a European team or whatever, and then when we lose, it's the end of the world.

"It's just really truly about winning games, keeping our feet on the ground and seeing where we go. What we have got, though, is a really good group who were really committed to win today. 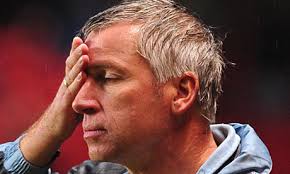 "The only agenda I have set them, really and truly, was to win, there was no other agenda because this game is an easy game to lose today.

"You win against Chelsea, you go to Spurs and then Norwich turn up and you lose, and we have sort of buried that a little bit, and I am really, really pleased.

"I am as pleased tonight as I was when we won at Spurs. I might not look it, but I am."

Meanwhile, Pardew admitted he was unaware of reports (printed in the Chronicle) from Argentina suggesting that skipper Fabricio Coloccini will once again request a move back to South America when the January transfer window opens.

Alan Pardew: "I wasn't aware of that, if I am honest.

"But it's difficult when players go home and they are interviewed. You never know if there is any truth in it.

"I haven't spoken to Colo about that."

And I'm sure it was another embarrassing moment for Ashley's "Patsy".