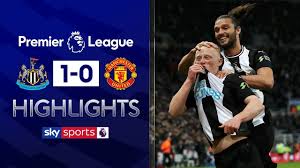 Newcastle boss Steve Bruce registered his first ever win against Man Utd as a manager in all competitions, in what was his 23rd attempt (W1 D5 L17).

Man Utd have won just nine points from their eight Premier League games this season – their lowest total after the first eight games of a league season since 1989-90 (8 pts).

Ole Gunnar Solskjaer won his first nine away games in all competitions as Man Utd manager, since then he’s won none of his last 11 (D4 L7).

Newcastle’s Matt Longstaff became the second youngest player to score a winning goal against Man U in the Premier League, after Jermain Defoe (19y 62d in December 2001 for West Ham).

No Man Utd player had more touches in the opposition box (4) or attempted more shots (3) versus Newcastle than defender Harry Maguire.

Man Utd are now 11 games without a win away from Old Trafford since beating PSG in March.