Not The Return He Hoped For 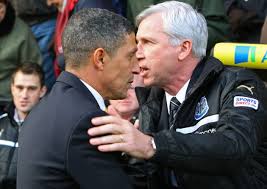 ... Norwich City boss Chris Hughton was left lamenting a poor opening half as his side slumped to their fourth away defeat in a row.

The former Newcastle manager was pleased with his side’s response but said the damage was already done after a disastrous opening half.

Chris Hughton: “You can’t afford to be 2-0 at half-time, and certainly not one down in the opening minutes.

“That’s the frustrating part of the game, there was nothing over-elaborate about their opening goal.