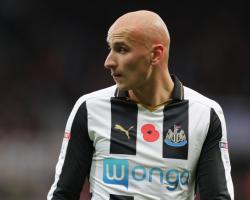 An Independent Regulatory Commission found against Shelvey, who had denied an FA charge of "using abusive and/or insulting words towards an opponent" aggravated by a reference to "ethnic origin and/or race and/or nationality", at a hearing in Birmingham.

An FA statement said: "Jonjo Shelvey has been given a five-match suspension and ÃÂ£100,000 fine after an FA misconduct charge against him was found proven.

"The Newcastle United player was charged with using abusive and/or insulting words towards an opponent in the 87th minute of the game against Wolverhampton Wanderers on Saturday September 17 2016.

"It was further alleged that this breach of Rule E3(1) was an 'Aggravated Breach' as defined in Rule E3(2), as it included reference to ethnic origin and/or race and/or nationality.

"The player, who denied the charge at an Independent Regulatory Commission hearing, was also ordered to attend an FA education course."