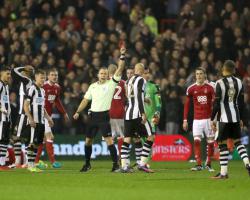 Lansbury was also inadvertently involved in Dummett's dismissal on the stroke of half-time when the midfielder was through on goal, only to be brought down by the defender

An FA statement read: " Both Jonjo Shelvey and Paul Dummett have had their suspensions withdrawn with immediate effect after their wrongful dismissal claims were successful following an Independent Regulatory Commission hearing

"The Newcastle United pair were dismissed for violent conduct and denying an obvious goal scoring opportunity respectively during the game against Nottingham Forest on 2 December 2016."