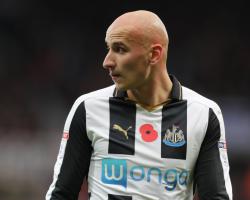 It is understood the personal hearing he requested after pleading not guilty to a Football Association charge of using "abusive and/or insulting words towards an opponent" will take place during the week beginning Monday, December 19.

Shelvey has been accused of an "aggravated breach" of Rule E3(1) as his alleged comments included a reference to "ethnic origin and/or race and/or nationality".

The charge relates to an incident in the 87th minute of the Magpies' 2-0 Sky Bet Championship defeat by Wolves at St James' Park on September 17 and is understood to have involved Moroccan midfielder Romain Saiss.

An allegation was reported to referee Tim Robinson immediately after the game, but Shelvey was not charged until November 8 with Saiss' limited understanding of English a complicating factor.

Witnesses have been interviewed yielding conflicting accounts, and the hearing is likely to be a lengthy process.

Shelvey, who strongly refutes the allegation, faces a minimum five-match ban if he is found guilty and that would come as a huge blow to his club as they continue their push for promotion back to the Premier League.