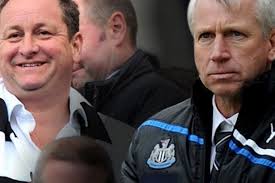 Mike Ashley underlined the need for a healthy string of youngsters to come through the system to boost the first team squad.

But that isn't happening, and next week in London the pair meet to talk about a season that promised so much and ended up with supporters in revolt.

And the academy will be top of Ashley's agenda.

Three players who were tipped for the top but fallen short.

Shane Ferguson and Adam Campbell are two others who are out on loan and been dropped by their adopted clubs, and face a difficult summer.

Who will be the next Gazza, Pedro, Waddle or Shearer?

Quite frankly, Ashley has every right to say MILLIONS of pounds have been wasted, and hold Pardew to account, because every player who has been tipped to come through has fallen by the wayside.

The names of defender Tavernier and forward Vuckic, who have been sent to Rotherham United on loan, have been circulated to Championship and League One clubs in the last few weeks as Pardew swings the axe.

Tavernier has performed well for the Millers as they made the League One play-offs and there is understood to be interest from the South Yorkshire club in keeping him if they are promoted.

He has one year left on his deal but Newcastle have told him to look elsewhere for opportunities – along with Vuckic, who has been less of a regular starter for the League One side.

At meetings with Mike Ashley, Pardew was told the owner expected great things from the academy this season.

Only Paul Dummett has broken into the team and he is starting to look out of his depth, despite gaining experience with every match.

Will he make it or end up like the rest - Kadar, Donaldson, Ranger, Tozer, Edgar, Huntington, K LuaLua - all given their chance but failed?

20-year-old Bigirimana has stagnated this campaign and was being offered out on loan – but there were surprisingly no takers.