​An impeccable display from Newcastle goalkeeper Martin Dubravka helped his side secure a 0-0 draw at home to a dominant Norwich City on Saturday.

The Canaries dictated play but were thwarted on numerous occasions by the 31-year-old, with his miraculous efforts seeing the Magpies move seven points clear of the relegation, while Daniel Farke's team remain rooted to the foot of the table. Dubravka's cat-like reflexes denied Sam Byram when the ​Norwich defender powered a header towards goal, the shot-stopper coming to his side's rescue at a corner.

​Newcastle should have punished that miss, the hosts missing two superb opportunities in the space of two seconds shortly afterward. Meeting a deep cross, Joelinton saw his header palmed away by Tim Krul, with Miguel Almiron then nodding wide after steaming onto the rebound.

Teemu Pukki - who'd earlier seen a fierce drive tipped over by Dubravka - was next to spurn a presentable chance in a madcap contest. The Finn's pace failed him as he bore down on goal, allowing Federico Fernandez to eat up the ground and dispossess the frontman. Kenny McLean should have handed the Canaries the lead inside ten minutes of the restart but he couldn't make the desired contact, having been found by a corner from Todd Cantwell.

Norwich were unable to punish an error in the Newcastle defence as Dubravka once again came to the fore, a strong hand stopping Pukki's low finish. However, his save rebounded into teammate Fernandez, who reacted quickly to clear off the line and prevent an own goal.

Though some of his players produced the occasional moment of brilliance, Bruce will not have been pleased by a lethargic, aimless showing from the Magpies. He added impetus to the home side as they went in search of an undeserved winner in the closing stages, the winger putting his talent on full display during an impressive debut.

While those around him looked flat, Lazaro played with purpose, lifting Newcastle and the crowd. This could prove a very canny signing from Bruce.

Dubravka was far and away the standout performer for his team, the Slovakian pulling off some fine stops to keep Newcastle level.

Without such a reliable pair of hands between the sticks, the Magpies would have been killed off by half time, with Norwich's forwards frustrated throughout the opening period. Games like this highlight why Dubravka is so popular amongst the Toon Army. However, they'll also alert the recruitment teams at some of Europe's top clubs.

Don’t care what anyone says ye put Martin dubravka in the Liverpool/Bayern/Madrid side and he be the best keeper on the planet earth .
The man has saved Newcastle more times than a Hollywood navy seal has saved the world from complete extinction.
Fantastic keeper .#toon

Norwich at home and we’re sitting back letting them play  surely we have to be taking the game to them! Yedlin has been awful get Lazaro on #nufc

Give Dubravka the keys to the city ASAP #NUFC

It's quite simple really - Norwich should have won.

Unfortunately for Farke, his team cam up against a goalkeeper in inspired form, Dubravka's dominant display keeping the Canaries' attackers at bay. With 13 games remaining before the end of the 2019/20 ​Premier League campaign, Norwich cannot afford to let their opponents off the hook like they did on Saturday, regardless of who's between the sticks.

They had more than enough chances to leave St James' Park with the spoils, yet the likes of Pukki couldn't sort out their radar. This will hurt Farke, with his men now seven points adrift of safety. Survival is looking a tall order these days.

The finishing was wayward for Norwich, but their build-up play was slick, with Cantwell at the heart of it all. 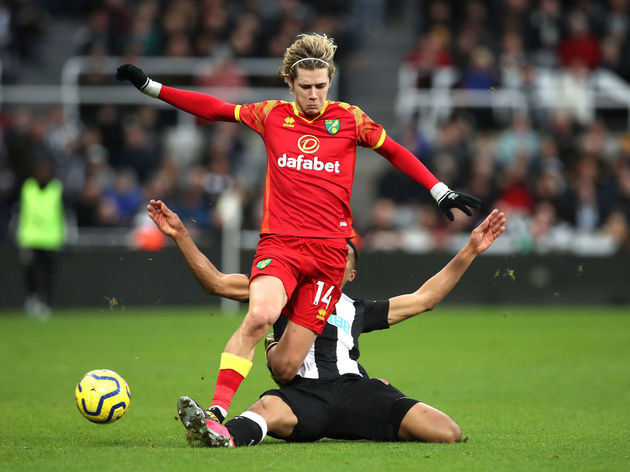 He was a thorn in Newcastle's side for the entire afternoon, keeping the visitors on the front foot with some neat distribution and silky dribbling at St James'.

Every Norwich fan : wow what a strong bench

Great to see Tim Krul get a good reception from the Newcastle fans today  pic.twitter.com/RAv6nbIzqy

Newcastle have an FA Cup fourth-round replay at Oxford United on Tuesday, before they travel to north London for a clash with ​Arsenal in the Premier League.

Norwich entertain ​Liverpool next Saturday, with a game at Molineux the following week as they take on ​Wolverhampton Wanderers.