The Magpie Group has come up with a list of 11 protest proposals as they look to step up the intensity of their demonstrations against Newcastle United owner Mike Ashley.

Protests inside St James' Park, throwing specific objects on to the pitch during games and attempting to cover up all Sports Direct advertising at the Magpies' ground are among the ideas being considered.

A collective of fans groups - with representatives from AshleyOut.com, True Faith, the Newcastle United Supporters Trust (NUST), Wor Flags and #IfRafaGoesWeGo, among others - The Magpie Group was formed with the aim of bringing about change at St James' Park, either through convincing Ashley to sell, or by encouraging the owner to back manager Rafa Benitez with funds.

The group - who have organised the protests outside Sports Direct on Northumberland Street and the club shop before home games this season - held their second public meeting on Wednesday at the Newcastle Labour Club.

Some of those who attended the meeting then headed across to Ponteland, Northumberland, and stood outside Rialto restaurant, where Ashley, Benitez and the United squad were out for a meal, which was paid for by the Magpies owner.

Fans held banners and chanted "Where's the money gone?" to Ashley as he left the restaurant, before the United owner was videoed allegedly showing a 'V sign' to supporters from within a car, something which the billionaire vehemently denies.

What became obvious at the Magpie Group's second public meeting is that some of their members are keen to increase the volume and scope of their protests against Ashley.

Ideas were sent in by fans to the group via social media and email, and 11 have been shortlisted ahead of a supporters' vote to rank their preferred method of protest.

As well as a stadium boycott - which could take place for one match. or could even be expanded to cover every game from the start of February onwards - other proposals include a nationwide demonstration outside Sports Direct stores, for protest stickers to be placed around the centre of the city, and for fundraising events to "ensure sustainability and expand" the movement.

Increasing "political pressure" on the regime is also among the proposals and, at the meeting, MP for Newcastle Central, Ms Onwurah - who has also proposed a petition to parliament on how the club is run - is already exploring the possibility of raising a debate in parliament on football ownership in the Premier League, with a specific focus on NUFC.

Fans will be given an opportunity to vote on the proposals - which they can rank in order of preference, from first down to 11th - in The Magpie Group's next newsletter later this month.

Supporters can sign up to receive the newsletter by visiting themagpiegroup.co.uk and leaving their email address.

The Magpie Group's 11 protest proposals for fans to vote on:

A mass march to a match. followed by a five-minute protest in the Milburn Stand atrium area

Boycotting games after January (still continue protests outside stadium, with banners inside for the meantime)

Fundraise to ensure sustainability for the movement, and so it can expand

Throwing protest objects on to the pitch for a specified game

Protesting at away games

From the North
Leave the M6 at Junction 30 and take the M61 towards Bolton. At the end of the M61, join the M60. Leave the M60 at Junction 9 and follow the A5081 towards Manchester. After about two miles you will reach Sir Matt Busby Way on your right for the ground.

From The West:
Follow M56 until its end and then take the M60 (W&N) as for Trafford Centre. At Junction 7 leave M60 and take the A56 towards Stretford. Stay on the A56 for 2.1 miles then you will come to see Sir Matt Busby Way on your left. The ground is half a mile down this road on your left, although on matchdays this road may be closed to traffic. Thanks to Brian Griffiths for providing these directions. 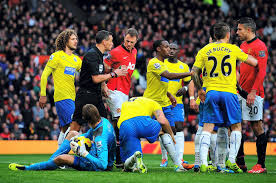 There are lots of small private car parks near to the ground, otherwise, it is street parking. Peter Bennett suggests parking at Old Trafford Cricket Ground (cost £10). Try to arrive early (before 1pm) as if you arrive later, it takes ages leaving the car park after the game. Gareth Hawker adds; 'I parked at the Salford Quays Lowry Outlet Mall (M50 3AH), a ten minute walk away from the stadium, the cost of which was £4, for four hours. There was virtually no traffic on leaving, and the road takes you straight onto the M601 which joins up with the M62/M6. This avoids the congestion of the traffic heading South'. There is also the option of renting a private driveway near Old Trafford via YourParkingSpace.co.uk.

Alternatively:
Park in Altrincham town centre and take the Metrolink to the ground (20 minutes). Some pubs such as the Bricklayers Arms in Altrincham town centre, will allow parking for the afternoon, as long as you enjoy a pre-match drink (they also do good food). Kevin Dixon-Jackson adds; 'You can get the Metrolink to Old Trafford from Ladywell Halt, in Eccles, where there is also free secure parking. It is about a 15 minute journey on the tram and costs £1.20 return. You can reach Eccles from the M60 (take the Carrington spur J8 A6144(M)) or M602 Motorway (leave at the first junction for Eccles, turn right, and right again at the lights, onto Eccles New Road. Secure parking is immediately on your right). You are only 200 yards away from the Drinking Capital which is Eccles town centre!'

My Tip For Parking & Getting Away After The Game:
Going along the A56, as the stadium emerges in front of you, follow the signs for Old Trafford Cricket Ground, which means that you will bear off the A56 to the right. At the end of the park on your left and before you reach the Cricket Ground, turn right into Great Stone Road. Just over the hill you will see a pub called the Quadrant, which is next door to a chip shop. There is plenty of street parking in this area, up to around 1.15-1.30pm. You are only a ten minute walk away from the ground. However, the Quadrant pub does not admit away fans (there are bouncers on the door checking tickets). After the game, head away from Old Trafford (keeping the Quadrant pub on your left) along the side streets. You will reach the A5145 (Edge Lane). Turn right down here and you will eventually join up again with the motorway and avoid all those traffic.

BY TRAIN AND METROLINK

Probably the best way to get to the stadium is by Metrolink or train from Manchester Piccadilly mainline station, as Old Trafford has both its own railway station next to the ground and a Metrolink station which is located next to Lancashire County Cricket Club on Warwick Road, which leads up to Sir Matt Busby Way. Normally the railway station, which is called Manchester United Football Ground, is less busy than the Metrolink. Alternatively you can get a bus from Piccadilly Gardens (see below).

Chris Kilcourse adds; 'The Metrolink also has another branch line going to Eccles from Manchester Centre. There are two stops to leave the tram - Pomona and Exchange Quay. These are on the opposite (Salford) side of the ground - probably a quieter line on Matchdays. Pomona is the closest to the ground, only a short walk away and closer than Lancashire CC. Exchange Quay is the one to use for return journeys as the trams get full and may not stop at Pomona going back'.

Amit Basu informs me; 'If using the Metrolink, away fans are better off taking the Altrincham - Bury route and getting off at Old Trafford station, by the cricket ground - just follow the crowds for the football. While the nearest stations to the ground are probably Pomona or Exchange Quays on the Eccles line, they not particularly convenient for getting to or from the away end. However, when leaving, if you have a train to catch after the game, avoid Old Trafford Metrolink at all costs! The best bet is get the train from Manchester United Football Ground station to Piccadilly (Journey time 10 minutes). The entrance to the station is immediately outside the away end'

As you would expect the pubs nearest the ground generally won't let you in if you are wearing away colours. Away fans are tending to head for Salford Quays which is around a mile away from Old Trafford. Luke Burns a visiting Birmingham City informs me; 'The Lime Bar in Salford Quays, has good beer, quick service and a good mix of home and away supporters'. Also in Salford Quays is the Matchstick Man pub, which is part of the Hungry Horse chain and also serves visiting fans.

Alternatively, it is probably best to drink in the Manchester City Centre or along one of the stops on the Metrolink..Andy Syborn adds 'away fans are okay to drink in the Bridge at Sale. It is two stops from Old Trafford on the Metro (about eight minutes journey time)'. Alternatively, alcohol is normally served within the ground, although for some high profile games the Club opt not to sell any. This is in the form of; Heineken £4.50 (400ml bottle), Bulmers £4.30 (330ml bottle), John Smith's £4.40 (440ml can) and White Sauvignon Wine £4.80 (187ml bottle). 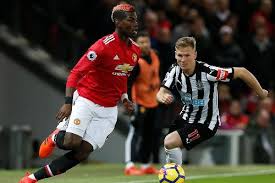 View From The Away Section At Old TraffordAway supporters are normally located in one corner of the ground, taking up part of the East and Sir Bobby Charlton Stands. The views from the away sections are excellent and up to 3,000 away supporters can be accommodated. Entrance into the stadium is gained by first being searched by a steward and then placing your ticket into an electronic bar code reader. It is then up a few flights of rather steep stairs to the concourse. Although the concourse looks a little cramped, it is adequate and there seems to be enough food and drinks outlets that the queues never seem to get too long. These sell a range of pies; Meat & Potato, Steak, Chicken & Mushroom (all £3.90) The Club also offer a 'United' Pie (£3.90), which I believe is a Chicken Curry Pie. Other refreshments on offer include; Cheese & Onion Pasties (£3.60), Foot long Sausage Rolls (£4) and Rollover Hot Dogs (£4.40). At the far end of the concourse is a large flat screen television showing Sky Sports. I don't know whether it is the American influence at Old Trafford, but I noticed on my last visit that after buying food or drink, that the attendant would always say; 'Enjoy the game' on giving back your change.

The away fans section is set back from the pitch as there is a disabled area to its front. The leg room between rows is a little tight, as well as the space between the seats themselves. This results in most away fans standing throughout the game. The good thing though, is that the away fans can really make some noise from this part of the stadium.

As you probably know Old Trafford is billed as the 'Theatre Of Dreams' and is certainly one of the best grounds in the country. However, if you have never been there before, be prepared to be a little disappointed, as the reality will probably not meet your pre-conceived expectations. Getting tickets for Man Utd home games is pretty difficult even if you are a member of the club, so make sure you have tickets before you travel.