Former ​Newcastle United loanee Jetro Willems is likely to be sidelined for the remainder of the year with his knee ligament injury.

The Dutch full-back was loaned from German side Eintracht Frankfurt to Newcastle in the summer but ruptured his cruciate ligament while playing against Chelsea in the Premier League. 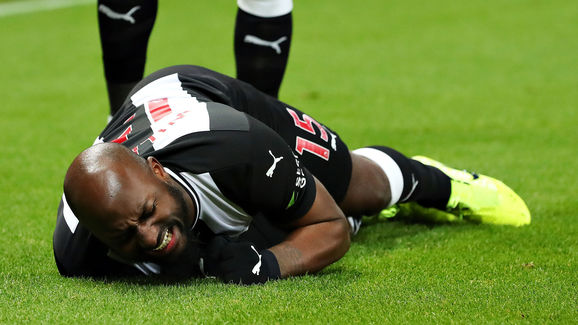 Willems was quickly becoming a fan favourite amongst the St James' Park faithful as his attacking raids from left-back provided some much-needed impetus to Steve Bruce's side. Two superb goals against Liverpool and Manchester City served as evidence of his threat further up the field, but this injury looks as though it will not only end his career on Tyneside, but his year as well.

As reported by German publication ​Bild, Eintracht Frankfurt's club doctor Dr Florian Pfab expects Willems to be unavailable for eight to nine months after he discovered a tear to both the ACL and PCL, as well as cartilage damage.

Given the length and severity of the injury, it looks unlikely that ​Newcastle will take up the option to buy Willems for a figure in the region of €11m (£10m) despite the quality he provided prior to his absence.

Before meeting with his parent club's doctor, Willems had been very confident about his return to Premier League action, but Bruce has been forced to make do without the 25-year-old for more than two months.

Since Willems injury, Newcastle have won just a single Premier League match in the subsequent six fixtures - 1-0 against Southampton in their last outing before football in England was postponed. Danny Rose was brought to the north east as Willems' replacement in a surprisingly active January transfer window for the Magpies, which also saw the arrival of fellow full-back Valentino Lazaro from ​Inter and Schalke's Nabil Bentaleb on loan.

Whether Newcastle will permanently secure Rose's signature is up for debate and would involve an intriguing exchange between their owner Mike Ashley and Tottenham chairman Daniel Levy. However, if a deal for Rose cannot be agreed upon, Newcastle will need a natural left-back to fill the sizeable hole Willems' injury has created.