He Played Because He Was A Hammers Fan

Steve Bruce has revealed why he recalled Jonjo Shelvey to his Newcastle United starting XI. 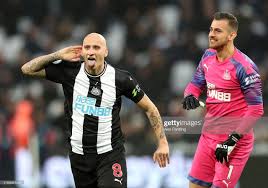 Shelvey scored in Saturday’s 3-2 win over West Ham United at the London Stadium.

The Romford-born midfielder – who revealed in August he had been “close” to joining the club – had last started in mid-September, having been hampered by a longstanding calf injury.

However, Bruce felt that Shelvey – who also delivered the set-piece which led to Ciaran Clark’s opening goal – would perform against the club he supported as a boy.

“I just thought Jonjo, if we needed a pass, could give a pass,” said Newcastle’s head coach.

“With set-pieces, he's made one and scored one. Always, in the back of my mind, I knew he was a West Ham fan, so this is a stage he wants to play on. He was very good. He's got to maintain it. I got the decision right.”