Ossie Ardiles was the manager, and I can tell you now, despite the results, there was not many booed the man because his team grafted their nuts off!

He was given coppers to spend and he brought in two players - Franz Carr and David Kelly - that was his tiny budget gone. And they never let Newcastle down.

Carr suffered through injuries, but he was a star during his time here, and what can I say about Kelly that hasn't already been said?

The most vital goal (v Portsmouth) in Newcastle United's history.

OK, we had some dross in them days, but to their credit, 95% of that team worked their socks off. And THAT is all you can ask from a player.

Raw talent, out of their depth (at this period), but no-one can say they didn't try. No dodgy French tremprament there.

And although Keegan got the credit for turning Steve Howey from a poor striker into an England international defender ... Ossie came up with idea of playing him at the back.

Alan Pardew is taking stick from the supporters, blaming everything and everybody for his failings.

When, at the end of the day all the supporters want is someone who is honest, and tells it from the heart!

Geordies are NOT bad people.

They haven't taken to Pardew because he is a con-man. Full of shit and half-hearted ideas.

He talks down to the Geordie public as though he is above them ... but now they see straight through him. 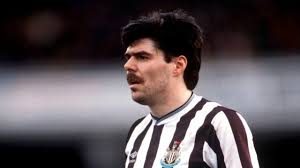 I played in Newcastle teams that weren’t so good in the Second Division.

But the fans didn’t always get on our backs. They want to see blood and sweat from each player and even if they aren’t up to standard the Geordie fans are fair.

They will level with you if they can see you are giving everything and busting a gut to get a result.

If they can recognise that they will give you the applause.

How many times have you been able to say that after recent games?

Six defeats in a row gives you the answer.

So for me the Cardiff game on Saturday is very much the Last Chance Saloon for Pardew in some ways.

Lose it, and we all know what the reaction will be.

He should know that too.

Cardiff are rock-bottom of the table and are where they are for a reason.

Only they should be coming up here and feeling they can get a win because of what is going on at Newcastle.

The club just looks like they need the kiss of life at the minute and I can’t see things changing unless something drastic happens.

The outsider might look at ninth, but I don’t think Newcastle should be what I call a teapot team anyway sitting in the middle of the table.

The worry is for me if something isn’t attended to now they could go down next season.

I can’t spell it out any clearer and it needs a major overhaul.

Beating Cardiff would be a good thing to lift the fans but it should not paper over any cracks.

I know my columns have made me sound like the Victor Meldrew of the football world this season, but if we’re not careful United will have one foot in the Championship if they don’t sort this mess out.