Frustration for Newcastle fans as Matt Ritchies penalty is ruled out 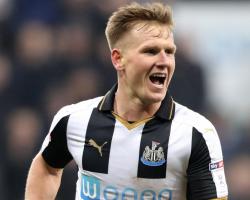 The winger converted his spot-kick on the half hour to seemingly break the deadlock although Dwight Gayle, who earned the penalty after being upended, had clearly encroached into the area

Football Association rules state that in the event of an "encroachment by an attacking player...(the) penalty is retaken" , but after some confusion referee Keith Stroud instead awarded a free-kick to the Brewers, infuriating the Magpies players and fans