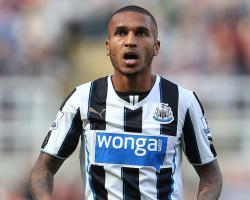 The Anglo-French investigation into suspected tax fraud in football saw arrests made after dawn raids at Newcastle United, West Ham and France on Wednesday

Officers from HM Revenue and Customs (HMRC) also visited Premier League leaders Chelsea on Wednesday morning, but no items were seized or arrests made

Marveaux joined Newcastle from Rennes in 2011 and made 39 appearances before heading to Lorient.

The dramatic series of events, which appear to have taken everybody by surprise, started with reports of police raids at Newcastle's St James' Park and training ground and West Ham's London Stadium

Soon after, a spokesperson for HMRC confirmed that its officers, not police, had ''arrested several men working within the professional football industry for a suspected ÃÂ£5million income tax and National Insurance fraud''

The co-ordinated raids, across the UK and France, involved 180 officers, with investigators searching premises in the north east and south east of England and seizing computers, mobile phones and paperwork

The spokesperson continued: ''The French authorities are assisting the UK investigation, have made arrests and several locations have been searched in France

''This criminal investigation sends a clear message that, whoever you are, if you commit tax fraud you can expect to face the consequences.''

A short statement from West Ham later confirmed their offices at the former Olympic stadium were raided, but said the Premier League side was ''cooperating fully'' with the investigation

A spokesman for Chelsea said: ''In connection with its wider investigation, HMRC has requested certain information which the club will provide.''

There is no suggestion of any wrongdoing on the Stamford Bridge club's part and Marseille, sixth in Ligue 1, have not replied to a Press Association Sport request for comment

Newcastle were the last of the English clubs to make a statement, waiting until Wednesday evening to confirm a "member of its staff has this morning been assisting HMRC with their inquiries"