Steve Bruce builds his tactics around 'parking the bus' ... but it is driving the Toon Army balmy! 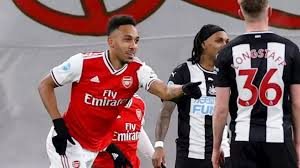 Poor to watch, 11 men behind the ball, and so often we wonder why we even bother.

OK, the first half we held our own, but once the Gunners found their shooting boots they scored at will.

Mesut Ozil poked in a third late on from substitute Alexandre Lacazette's pass and the Frenchman converted a fourth in injury-time.

Newcastle attempted to play further forward after conceding but were restricted to few opportunities - the dangerous Allan Saint-Maximin coming closest with a curling strike that rattled the post.

What makes it so bad is the fact that the Gunners were poor!

Arsenal have suffered a wretched season in the top-flight, 16 points and six places worse off than at this stage under Unai Emery last season.

A poor start this term led to the Spaniard's dismissal and although they had lost just once under replacement Arteta, they had drawn seven games since his appointment in December.

Before the game, only the bottom two sides Watford (5) and Norwich (4) had won fewer games than Arsenal and even this victory was not plain sailing. There were plenty of groans from the home supporters long before the first goal.

Sheffield United in sixth-place were in our sights last week. Yes were were optimistic, but aren't we always?

The appointment of Steve Bruce as Newcastle boss to replace the popular Rafael Benitez was not universally well-received by supporters. Alan Shearer told him not to take the job! But the ex-Manchester United defender has responded to critics by keeping the Magpies out of the bottom three.

Some could even say we only need three more wins to be safe reaching the 40 point mark. And in only the second week of February ... that would have pleased many if it was offered back in August.

The Tynesiders lie 12th in the table, seven points clear of the drop zone having been just one point outside the relegation place at this stage last term, but this heavy loss was a big setback. If only to show what we knew already, we aren't good enough!

Bruce's defensive plan with five-at-the-back did not work on this occasion as they were picked off by Arsenal's front-foot pressure and finishing in key moments.

But it is at the other end of the pitch where they really struggle, they have scored just 24 times, with only Crystal Palace less prolific.

In Joelinton - the club's record £40m signing from Hoffenheim - they have a striker who has netted just once in the league and is on a run of 22 games and 1,856 minutes without a goal.

The Brazilian works hard for the team but he is clueless in front of goal.

One chance did fall to him in the first-half when he was unmarked eight yards out, but his flicked effort at the near post drifted off target.

Full-back Lazaro, a recent loan signing from Inter Milan, impressed, winning the ball back three times and providing an outlet on the flank, while on the other side of the pitch Danny Rose made more passes (42) than any team-mate despite the constant jeers from the home fans for his Tottenham links.

It will only take a bad performance before his Mackem links are questioned.