Mohamed Diame has warned that Newcastle are not done yet after effectively securing their Premier League status for another season. 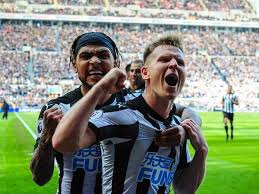 The Magpies, who found themselves in the thick of a relegation battle after going nine games without a league win as 2017 drew to a close, sit 10th in the table after Sunday’s 2-1 victory over Arsenal, their fourth in succession.

However, far from patting themselves on the back, midfielder Diame and his team-mates are looking to add to their tally of 41 points with next weekend’s opponents Everton in ninth and eighth-placed Leicester now in their sights.

Diame said: “We’re still going to try to finish as high as possible in the table. As I have said before, we have to enjoy winning for a few days, but after that, focus on the next task in hand.

“We have to start work again this week and look to Everton.”

Manager Rafael Benitez was always confident his team would improve as the season wore on, and his faith has been fully justified in recent weeks.

Aided by the January loan additions of goalkeeper Martin Dubravka, Chelsea midfielder Kenedy and latterly, Leicester striker Islam Slimani, they have lost only three of their last 15 league games, two of them to newly-crowned champions Manchester City and the other against Champions League semi-finalists Liverpool.

The central midfield axis of Jonjo Shelvey and Diame, who had previously struggled for consistent form during his time on Tyneside, has proved equally crucial, although the 30-year-old former Senegal international played down his own contribution.

He said: “It’s not only me, the team has been working really hard. We’ve all done brilliantly and it’s a massive achievement for everybody at the football club.

“Not just that, for the fans, the people of the city and everybody connected with Newcastle itself. It’s just brilliant.

“We deserve it and we can enjoy it now.”