Come On Bruce - Smell The Glove!

Steve Bruce is ready to tackle a “ridiculous” run of fixtures – with the help of his entire Newcastle United squad. 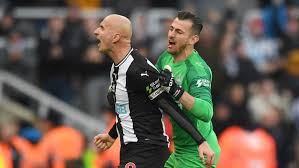 But we are nowhere near the list of fixtures others have to face.

We played Wolves in our 11th game, when the Midlanders were playing their 22nd game of the season.

Newcastle, 14th in the division, take on Sheffield United at Bramall Lane tomorrow night. The game against Bruce’s former club is followed by fixtures against Southampton, Burnley, Crystal Palace, Manchester United and Everton.

“Certainly, over the next few weeks, you’re going to have to use the squad,” said Bruce, United’s head coach. “Tomorrow’s a different game, we’ve only played Sunday, but if you look towards the end of the month it’s a ridiculous schedule really. For the teams playing in Europe, it’s absolutely ludicrous. We’ll have to adapt and have a bit of freshness when needed.”