Bruce A Fool To Think They Would Wilt 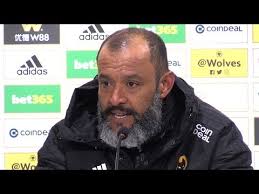 Steve Bruce hoped Wolves would be heavy legged after Thursday's European exploits, but his own team fell apart and could hardly raise a gallop.

Wolves manager Nuno Espirito Santo, spoke to BBC Match of the Day: "We performed better in the second half. Newcastle were organised and we had problems but in the second half we were better and created so much. We combined well and I'm happy - the challenge is to do it in both halves."

On his side's busy schedule: "We are embracing the challenge. We have played 20 games, that is a lot of effort. There are no days off and so a lot of credit goes to the boys."

On losing Willy Boly this week through injury: "He's a big player and a big man and we will miss him, but it is something that can happen. He was doing a box in training and fell - it is sad that has happened."